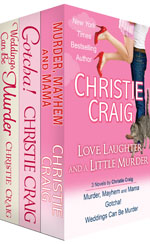 And at the end you'll be treated to a special EXTENDED teaser -- EIGHT CHAPTERS -- of BORN AT MIDNIGHT, the first book in the New York Times-bestselling YA paranormal series, Shadow Falls, that Christie writes under the name C. C. Hunter. Sample the teaser and if you like what you read, you can now purchase the full e-book for just $2.99!

You'll also get a sneak peak at the first chapter of BLAME IT ON TEXAS, the second book in Christie's HOTTER IN TEXAS series, out now with Forever Books.

Being A Mama Is Hard. But The Job's Even Tougher When You're Dead...

Cali McKay's mama isn't ready to pass over to the "other side" yet. Her unlucky-in-love daughter needs her now more than ever. Before Mama can chain-smoke her way to heaven, she's gotta make sure Cali's ex deadbeat boyfriend doesn't get her daughter killed.

Cali lost her mom to cancer. Detective Brit Lowell, lost his partner to murder. Now he's in the mood to take down some dirtbags and Cali's ex just happens to be a dirtbag leaving a trail of dead bodies behind him. Can Brit trust this beautiful woman to help take down her ex? Can Cali look past this sexy cop's hard exterior to trust him with her heart? Can life get any crazier when Mama starts meddling from the grave? Only one thing is for sure--none of it will matter, unless they catch a killer before the killer catches them.

WEDDINGS CAN BE MURDER:

Till Deaths Do You Part...

Katie Ray was about to marry a man she didn't love -- and who didn't love her. Even losing her $8,000 engagement ring wasn't enough of a sign to call things off. What did it take? Being locked in the closet with a sexy PI, and being witness to murder.

...Or They Bring You Together

Carl Hades hardly wanted to be shackled with another man's soon-to-be-wife, especially when the gorgeous redhead stirred emotions he'd avoided for years. He'd been hired by an elite Houston wedding planner to investigate some missing brides. When those brides turned up dead, Carl saw where the whole situation was headed: just like Katie's wedding ring and her ceremony, right down the toilet. Because, while Katie was suddenly and delightfully available, he had a feeling she was next in line to die. And before he could ask her to say "I do," he had to know who would say "I did it."

Macy Tucker was five years old when her beloved grandfather dropped dead in his spaghetti. At twelve, her father left his family in the dust. At twenty-five, her husband gave his secretary a pre-Christmas bonus in bed, and Macy gave him the boot. To put things lightly, men have been undependable.

That's why dating's off the menu. Macy is focused on putting herself through law school -- which means being the delivery girl for Papa's Pizza. But cheesier than her job is her pie-eyed brother, who just recently escaped from prison to protect his new girlfriend. And hotter than Texas toast is the investigating detective. Proud, sexy...inflexible, he's a man who would kiss her just to shut her up. But Jake Baldwin's a protector as much as a dish. And when he gets his man -- or his woman -- Macy knows it's for life.