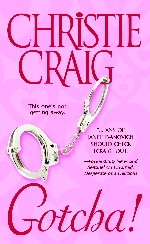 Macy Tucker was five years old when her beloved grandfather dropped dead in his spaghetti.  At twelve, her father left his family in the dust. At twenty-five, her husband gave his secretary a pre-Christmas bonus in bed, and Macy gave him the boot. To put things lightly, men have been undependable.

That's why dating's off the menu. Macy is focused on law school, and putting herself through—which means being the delivery girl for Papa's Pizza. But cheesier than her job is her pie-eyed brother, who just recently escaped from prison to protect his new girlfriend. And hotter than Texas toast is the investigating detective. Proud, sexy...inflexible—he's a man who would kiss her just to shut her up. But Jake Baldwin's a protector as much as a dish. And when he gets his man—or his woman—Macy knows it's for life.

What reviewers are saying about
GOTCHA!

Gotcha!
Craig (Divorced, Desperate and Delicious) fills her new romantic thriller with a playful tone and quick banter. Law student and pizza delivery girl Macy Tucker becomes the special project of detective Jake Baldwin after her sweet but unreliable brother, Billy, escapes from jail on the heels of suspected killer David Tanks. Jake starts out focused on recapturing Tanks, his nemesis, but soon begins to feel very protective towards Macy. Unpleasant experiences with her dying grandfather, abusive father and cheating ex-husband have left her with little trust, so Macy has sworn off men, but Jake is persistent and attractive, and their families quickly begin encouraging the match. Supporting characters like Macy's sexy, yoga teaching grandmother are engaging and funny without being caricatures, and the mystery and romance plots fit seamlessly into a witty and fast-paced novel that's easy to read and satisfying to the heart. (June)

Filled with plenty of action, delightfully quirky characters, a mean villain and a rocky road to romance, Craig's novel is an entertaining tale that holds the interest from the first sentence to the final word. The hero's family dynamics and the brother's travails add to a great story.