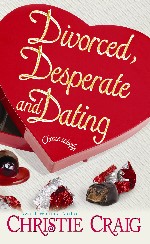 Sue Finley murdered people...on paper. As a mystery writer, she knew all the angles, who did what and why. The only thing she couldn't explain was...well, men. Dating was like diving into a box of chocolates: sometimes the sweetest-looking specimens were candy coated poison. After a breakup with a bank robber and a divorce from a cross dresser, she gave it up for good. Then came Detective Jason Dodd.

Raised in foster homes, Jason swore never to need anyone as much as the parent who abandoned him. That was why he failed to follow up after experiencing the best kiss of his life: real passion was addictive. But when Sue Finley started getting death threats, all bets were off. The blonde spitfire was everything he'd ever wanted—and she needed him. And though this novel situation had a quirky cast of characters and an unquestionable bad guy, he was going to make sure it had a happy ending.

"Mr. Claus was looking for you," Jason said.

Sue dropped the present she'd just wrapped under the tree and looked up at her sleepy husband who wore only his naughty or nice boxers. The man really got into Christmas.

"What does Santa want?" On second thought, she didn't need to ask, his well-filled out boxers said it all.

"He has an early Christmas present for you." He ran his hand over his hard abs. "Interested?" His voice rang out, husky and sexy.

"When have I ever been able to say no to you?" She tried to put some tease in her voice.

"Oh, you said no to me quite a few times in the beginning if my memory serves me right." He sat down behind her on the floor. The heater kicked on, chasing away the December chill, and sending the smell of pine throughout the room. "I had blue balls for months."

"We didn't date for months."

"Well, it felt like months. Don't know why you waited so long either." He wrapped his arms around her middle. Silence fell as Christmas lights flickered on the tree.

"Were you peeking at your gifts?"

"I'm not the one who has a peeking problem."

"Then how did the tape come loose?" Sue leaned against his naked chest. The wall of male muscle felt sleepy warm. It was a warmth that always made her feel safe, even safe from the stalker that Jason had personally taken down. But tonight the comfy feeling was chased away by butterflies.

She hadn't told him. She knew she should, but God help her, she was afraid. Afraid he'd say the wrong thing, afraid he'd break her heart. Afraid she'd have to break his.

"Faulty tape, I'm sure." He leaned over her shoulder and studied her.

She forced a smile on her face.

"Fine." She wasn't fine. She was just a frog's hair away from crying. Don't cry. Don't cry.

"You were peeking, weren't you?" His hand slipped up under her pajama top.

"No. I was wrapping one last gift." And asking for a Christmas miracle.

"Who's it for?" Curiosity filled his voice like a kid. In so many ways, when it came to Christmas, her new husband was a kid. His years in the foster care program had cheated him out of the kind of Christmas a boy deserved.

"It's for you." She'd never known a grown man could love Christmas so much.

"Really." He picked up the gift she'd just wrapped. "Can I open it?"

"No!" She tried to snatch the gift, but he held it up.

"I'll let you open one." He reached over with his other hand and picked up the small package. "You'll love this one." He kissed the side of her neck. "And so will I. Oh, open this one, too. I can't wait to see your face when you open this one." He dropped the presents in her lap.

Sue pushed them away and jumped up. "No. Put the gift back."

"Why are you crying?"

Damn. He was right. She was crying. She wiped her cheeks and the back of her hand.

His brows tightened. "Did I do something wrong?"

"No." Her tears came faster.

He studied her. "What's wrong. You've been acting weird all day."

He tilted her chin up. In his eyes, she saw it. Love.

Sue's gaze went to the gift he still held. Beneath the fancy wrapping were the seven sticks she'd peed on this morning. All seven positive pregnancy sticks. And it wasn't until she saw that little pink plus sign on that seventh stick that she knew how much she wanted a baby. Jason's baby.

Yet after she agreed to marry him, and got around to mentioning children, he'd looked her dead in the eyes and said he didn't think he could do that.

She'd thought he'd make the best daddy in the world. But she figured if Jason really didn't want children, she'd be okay with it. They already had five cats and were looking at getting a dog.

But Fate had stirred the pot when his little swimmers escaped his condom, and met up with her eggs for a little dosie do.

She motioned to the gift. "Open it."

"Not until you tell me what's wrong."

Sue saw the insecurities in his gaze. Insecurities she knew his single mother had carved into his heart when she'd never come back for her eight-year-old son after she'd been released from drug rehab. Sue wasn't sure she'd ever meet the woman, but if she did, she was going kick her ass. Normally, Sue wasn't a violent person. Pregnancy must be messing with her hormones.

He pulled away the wrapping, opened the box, and emptied out the seven sticks in his hand. "What is--?" His eyes widened. He'd figured it out.

His gaze shot to her. "You're scared that I can't do this, aren't you? That I'll mess up?"

"No!" She put her hand over his heart. "I know you'll make a perfect daddy. But you said you didn't want kids."

She hiccupped. "You never had a husband, and you're doing a bang up job."

"Am I?" He ran his palm over her abdomen. "Damn. Have you ever been scared shitless and excited at the same time?"

She laughed. "This morning when I peed on all seven of those sticks."

"There's no way I'm going to get you a gift as good as this one."

"Oh, I don't know. Didn't Mr. Claus say something about having an early present for me?"

He rolled his eyes. "You think I'm going to sleep with a pregnant woman?"

She tugged off her top and stepped out of her PJ bottoms. Then completely naked, she started walking backwards. Grinning, she crooked her finger at him.

What reviewers are saying about
Divorced, Desperate and Dating

Christie Craig has penned a humorous tale that is one part suspense and all parts fun. While there are a few minor characters who help provide movement to DIVORCED, DESPERATE AND DATING, it is Sue and Jason who set the story's pace. Likeable characters have you rooting for them, and the highly entertaining plot will make it hard to put the book down. Pick up DIVORCED, DESPERATE AND DATING on your next visit to a bookstore. Patti Fischer - Romance Reviews Today

Divorced, Desperate, and Dating is a hilarious, romantic, mystery that is very entertaining from start to finish. There are very few non paranormal romances out there nowadays so it is always fun to read a contemporary romance with a touch of mystery. Christie Craig writes deliciously sexy romances that are as addictive as a can of Pringles; once you start you can't stop! Rachael - Night Owl Romance

Divorced, Desperate and Dating is another delightfully entertaining novel with an intriguing mystery. - Romantic Times Review 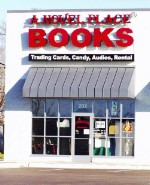 Chey, Bookseller, at A Novel Place in Osseo, MN:

I loved Divorced, Desperate and Dating, by Christie Craig. I loved the characters Craig gathered to entertain us with and how she brought back the characters from Divorced, Desperate and Delicious into the new story so we can catch up on how they are doing. The humorous yet dysfunctional family is something we all can relate to. The storyline was even hotter than Christie's other books for Jason and Sue couldn't keep away from each other. Again Craig has outdone herself in bringing us a story that is so "life-like" and in which all of us can find something of ourselves, our families and our friends in her storyline. We are definitely hand-selling all Craig's books. Thanks again, Christie Craig, for keeping us entertained. Please write faster.

I really, really liked this story. It's fast-paced and extremely clever with a really good plot. Christie Craig's characters are very real, emotional people. You have to love Jason with his complicated background and admire him for becoming the man he is. You'll also love Sue's quirky mom and her "Elvis" boyfriend. Plan to put aside enough time to finish this book at one sitting. It's really hard to put aside! I look forward to more of Ms. Craig's fiction.