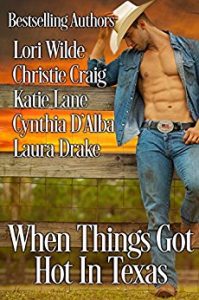 If you love sexy cowboy romance books and you love Texas Romance, these Five BESTSELLING authors bring you both in When Things Got Hot in Texas.

Cynthia D’Alba Texas Daze
A quick fling can sure heat up a cowgirl’s life.

Laura Drake Cowboy Karma
Karma is a good judge of character, and you my friend, are screwed. 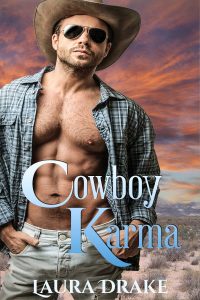 Bull rider Stead James would never say he’s sorry. But that was before he took on Dirt Nap, the meanest bull in the finals. He wakes two days later with a skull fracture, and an epiphany – he knows he needs to change. While healing, he studies a book on Zen, dubs his final year as his ‘Apology Tour’, and attempts to make amends for his arrogant, bad boy lifestyle.

Things aren’t going as planned, even before he runs into Harper Taylor’s daddy’s fist. He apologizes for taking Harper’s virginity – only to pick himself off the dirt – again. Turns out, he didn’t know about that part; he was angry about Stead not carrying through on a promise to put on a bull riding to benefit the Local Apache Reservation.

Harper has the temper to go with her red hair, but to Stead, she looks like an angel. She has an apology of her own – for using him to relieve her of her virginity.

Amends are a long and bumpy road – but if Stead really has changed, there could be an angel waiting at the end.

Bull riders are arrogant and believe they’re bullet-proof. They have to be to get on a one-ton animal that wants to stomp their guts out. I wanted to explore what would happen if one suddenly learned better – and wanted to make amends.

How about you? Do you believe that men can change their ways? Share your thoughts with us!

When Things Got Hot In Texas comes out June 5, 2017, but you can preorder it now for only 99 cents at Amazon and Barnes & Noble.

6 thoughts on “When Things Got Hot In Texas”