WINNERS!  WINNERS!  The lucky winners from last week’s blog with Ava Miles are: Katrina and Barbara Hopkins! Please email me at: christie (at) christie-craig.com with your choice of print or e-book and your delivery information and I’ll get you your prizes.  Congratulations!

Today, I have a fun debut from a new author named Neicey Roy who’s here to tell us about her book, Done with Love, a Romantic Comedy from her What’s Love??? series.  I’m excited to meet her and get to know her a bit more!

OK, Neicey, tell me your hero/heroine’s biggest, most embarrassing secret.

Oh, wow. It seems like Lexie, the heroine from Done With Love, no longer has secrets, not after the big wedding scandal. But, I think Lexie would die of embarrassment if her bestie, Roxanna, were to find out what went on in the guest room between Lexie and a certain hunk hero… (who happens to be Roxanna’s cousin) *grin*
What was your favorite scene to write?
Oh my gosh, I can’t exactly describe it, because I don’t want to give anything away. But while I was brainstorming this scene, I was FB messaging one of my good friends and critique partners, Casse NaRome, an author who shares my kind of humor, and we were laughing so hard, we were both tearing up. Pretty much writing the scene through FB messaging as the images came to me. I swear, it was so much fun. I’ve never had so much fun brainstorming a scene before. This scene may or may not involve taser guns and a very poor job of coercion.

If you could cast your book into a movie, who would play the leading parts?

Yay for the #dreamcast!

Alexis (Lexie) Gorecki – Lexie is cream and roses, and for as long as she, or anyone else, can remember, she’s been in love with the fairytale of happily-ever-afters. She’s been planning her dream wedding since the age of seven. Hayden Panettiere has the ability to capture youth and innocence, with that girl next door vibe, and I think she’s perfect for Lexie’s character.

Leonardo (Leo) Moss – Um, yeah… Leo must definitely be played by Channing Tatum. I don’t even think there needs to be much explanation, besides the fact that he has green eyes, brown hair, gorgeous lips, and an out of control body. Plus, I love Channing’s ability of putting humor into his characters, as well as playing a serious. He’s perfect as Leo, and perfect for Lexie, the heroine of the Done With Love.

Imogen (Gen) Gorecki – Since Gen is Lexie’s twin sister, but with shorter hair, she’d have to be played by Hayden Panettiere, and of course she’d make the perfect Gen. She’s a great actress, so I don’t think she’d have any trouble playing the twins. Gen’s character is fun and colorful, she loves rock where Lexie loves country music. They’re complete opposites when it comes to style, but Hayden’s talented enough she could pull it off. She’s got this. No bigz.

Roxanna (Roxi) Moss – Lexie’s and Gen’s  BFF since grade school when Roxanna almost ran them over with her pink scooter. Roxanna is half Italian, half Filipino and 100% drama and fun. Vanessa Hudgens would be perfect for to play Roxi in this series.

Richard (bad date that never ends) – I’ve loved Richard’s character ever since writing him into Another Shot At Love. If you haven’t read Another Shot At Love, you should. Definitely. I recommend it so that you can fall in love with Richard’s character, too.He’s super geeky, but good looking, and his idea of a hobby is delivery pizza, a couch and hours playing video games, while sometimes wearing a replica Master Chief helmet to get pumped up for Xbox live… But, mostly, he’s inexperienced with women, has some equally inexperienced friends who give him really bad chick advice. Bless his hot, geeky heart. If you’ve ever seen Justin Timberlake in Bad Teacher, read him in the What’s Love??? series and picture him in the role of Richard, and let me know what you think 🙂

Catherine (Cat) Gorecki – We met Catherine in Another Shot At Love, a very pregnant and hormonal older sister to the twins. In Done With Love, she’s a new mother of her own set of twins. I think Katherine Heigl would play the perfect stressed out, sleep deprived new mother, and Katherine rocks in romantic comedies 🙂

Matthew (Matt) Sesnick – Seriously, Ian Somerhalder is out of control and needs to behave…but only after he plays Matt, Gen’s boyfriend, in the What’s Love??? series. He’s perfect, and exactly who I was fantasizing…I mean, exactly who I was professionally imagining would play Matt in the movie. He doesn’t have hazel eyes, but I’m sure readers would forgive that oversight if it’s Ian who plays the role 😉

What is in your TBR pile?

I write romantic comedy, because I love watching them on TV. I see my novels as scenes being played out on the screen. But, when I read, I prefer paranormal, futuristic sci-fi, fantasy, and I love, love, love mysteries and forensic mysteries. I have a couple of Patricia Cornwell books on my TBR pile that will need to be read before any other titles. I can’t wait for some down time to get to her books. And, when it comes to reading for pleasure, I prefer paperback or hardback covers over my Kindle or iPad eBooks. Call me old school 🙂 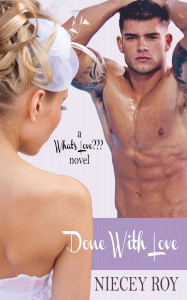 Once upon a time…

Months after being blindsided by her own horrific wedding scandal, Lexie is desperately trying to keep her boutique afloat in the wake of all the bad publicity. Waging war against her evil almost-in-laws—the people who will stop at nothing to ruin her reputation—sounded much better in her head. Lexie’s strawberries and cream personality really isn’t cut out for taser guns and blackmail.

To complicate matters, Lexie’s first love is back in town with his sexy green eyes and out-of-control abs. He already broke her heart once before, the beast. Leo Moss has always been her weakness and he’s made it perfectly clear what he wants. Can he convince Lexie she’s not done with love just yet?

Awesome!  Thanks so much for being here, Neicey!  It was great to have you.  Now two lucky commenters get their chance to win a copy of your book.  And be sure to check back next week to see if you won!  Good luck!

11 thoughts on “Done with Love”