WINNERS!  WINNERS!  The lucky winners from last week’s blog with Janet Nash and Susan Muller are: Cassie Whitman, Kathleen O., Becka Lynn, bn100, Cheryl Christel, Charity Drake, Debby B., Katrina, and Katrina Hall.  Email me at: christie (at) christie-craig.com to claim your choice of either of those fantastic Amazon e-books.  Congratulations!

Howdy, guys!  Well, it’s a week away.  One week until Austin’s story, Texas Hold ‘Em, finally plops itself on the store shelves and they open the floodgates of the e-book world and it starts magically appearing on your Kindles, Nooks or I-phones.  Have you preordered it?  I hope so.

However, my book isn’t the only one about to dance its way into reader’s hearts.  My friend, Kathleen Brooks, has her latest, Final Vow, out tomorrow.  Tomorrow!  So her and I got together to chat and compare our heroes and heroines.  I hope you enjoy getting an inside peek at our characters and learning firsthand about their flaws, fears, and their hearts. 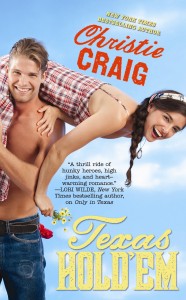 The last thing veterinarian Leah Reece needs is a man in her life. They’re nothing but trouble-and not even the fun kind. But when her apartment is broken into and Leah suspects Rafael, her dangerous half-brother, of foul play, she can’t deny she could use a little help. She just never expected that help would come with twinkling blue eyes and a sexy smile…
All PI Austin Brook wants is to nail Rafael DeLuna, the man who framed him for murder. He’ll do anything for information-even lie about his identity to charm Leah, DeLuna’s half-sister. But her sweet dimples and fiery spirit soon make her more than just his only lead. Leah becomes his every desire. As Austin closes in on DeLuna, it’s clear he won’t go down without a fight. Now the only way Austin can protect Leah is to reveal all of his secrets and risk losing her for good. 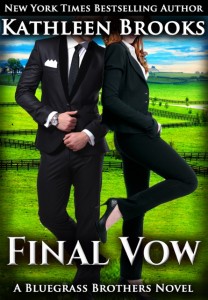 As the ultimate bodyguard, Ahmed’s focus has been protecting the lives of everyone he cares about. When the darkest part of his past resurfaces, Ahmed knows he must go on the offensive to protect his future . . . a future with the one woman that can match his toughness and return the love that was once robbed from him.
Bridget Springer’s private security work involves training with a mysterious man feared by many in her line of work. She finds herself drawn to Ahmed despite his attempts to remain distant. Bridget vows to help Ahmed in his pursuit of justice, not knowing the full danger that she would find along the way.
As Bridget and Ahmed’s passion heats up, so does the threat from Ahmed’s oldest enemy. Can they defeat him and finally be free to pursue their chance at love?

Christie: My hero, Austin Brook, is as good in the kitchen as he is in the bedroom.

Kathleen: My hero, Ahmed is as good with his hands as he is with his gun.

Christie:  My hero, Austin, loves tomatoes, but he prefers to eat them not to have them pummeled at him by the heroine.

Kathleen:  My hero, Ahmed, loves silently, but he prefers to maintain a tough exterior not to face his emotions even when punched by the women he can’t help but love.

Christie:  Only after being lied to, hog-tied with duct tape and kidnapped by Austin, does my heroine, Leah Reece, decide she’s in love with the man.

Kathleen:  Only after being threatened by an evil terrorist, does my heroine, Bridget Springer, decide she’s going to kick a little ass to save her chance at love‑whether Ahmed likes it or not.

Christie:  One lesson you’ll all learn in Texas Hold ‘Em is: to never let your past get in the way of your future.

Kathleen:  One lesson you’ll all learn in Final Vow is:  Never let your past get in the way of your future.

Kathleen: My heroine, Bridget Springer’s biggest strength is her confidence, whether it’s real or fake.

Christie:  My heroine, Leah Reece’s biggest strength is her determination to protect those she holds close to her heart . . .  and her ability to refrain from neutering all the males who break her heart.

Kathleen: My hero, Ahmed, would rather be captured by a terrorist group than face the gossip and interrogations at the Blossom Cafe in the small town of Keeneston.

Christie:My hero, Austin, an Ailurophobe—a person with an irrational fear of cats—would rather face Leah’s multiple cats, and the odds of being neutered by her, than face living life without her. (Did I mention that Leah is a veterinarian that specializes in felines and neutering?)

Kathleen: My hero, Ahmed, is unsure how to handle Bridget when she refuses to be intimated by him, but that’s nothing compared to her overprotective father.

Christie:  My hero, Austin, is unsure how to protect Leah when she refuses to believe there are men with guns coming for them, but that’s nothing compared to his befuddlement of how to protect his heart from loving her.

Kathleen: My heroine, Bridget’s motto to life would be summed up as anything guys can do, girls can do better.

Christie: My heroine, Leah’s motto to life used to be summed up as the only male she’d let into her life and bed was a neutered cat, but now it’s: loving someone is a risk, but it’s a risk worth taking.

Okay, now to enter to win a $25 gift card from your choice of either B&N or Amazon, tell Kathleen and I what your motto is for life.  Come on, it’ll be fun!!

Texas Hold ‘Em is available for pre-order now at:

Final Vow is available at:

52 thoughts on “It’s the Final Countdown!”