WINNERS! WINNERS! The winners of Alison D’Laine’s autographed books from last week are: Sunnymay and Cheryl Christel.  Email me at: christie (at) christie-craig.com with your mailing address and Alison will mail your gifts.  Congrats!

Also, before we get started, I wanted to remind everyone that I’ll be at the Perfect Blend Bakery Cafe at 329 Sawdust Road in The Woodlands, TX this Thursday, January 16th from 7-9 for Books @ The Bakery with several other authors for an event benefiting the Literacy Volunteers of Montgomery County. It’s a great event for a worthwhile cause–come see me!

So, today, I bring you something a little different and special.  Two of my friends are here to share not only their newest releases with you, but we’re going to learn about them through the eyes of their heroes.  Today, Janet Nash has brought along her hero, Jack Oakes from her book, Invisible Surveillance, and Susan Muller has Remy Steinberg fresh from Voodoo on Bayou LaFonte.  I’ve asked them to give us some insight, so stick around, hear what two good lookin’ cop types have to say, and be sure and comment because I’m going to be giving away FIVE Amazon e-copies of each of their books today!

Remy, I’m gonna start with you, give us your full name and official job description.

Alright, Remy, you first. Tell us a little bit about your story in Voodoo on Bayou LaFonte:

One Friday afternoon, I received a panicked phone call that my daughter was missing.  I’ve blamed the state of Louisiana for all my problems since I was eleven-years-old, but I was in my car and racing toward deep swamp country within five minutes. Once there, I willingly confronted shotgun-wielding drug dealers, voodoo priests, black magic, and a raging hurricane. But the hardest thing I had to face was the ex-wife I still loved.

Wow, sounds intense!  Jack, how about you and Invisible Surveillance?

Well, I’m hours away from boarding a plane to the Caribbean.  My brilliant bride-to-be, Callie Hunter, pulled the rug out from under the sadistic mastermind, Rick Powell yet again. He’d infiltrated the CIA database and caused all kinds of havoc. My buddy, Tom Ballard, was in jail for a few days and I got stabbed. Cool part was meeting Ballard’s son, Logan– great kid with lots of potential. He’s got an interview with my partner next week.

Remy, obviously your path was a little different than your counterpart Jack there. Why do you think that is?  Do you think that’s a product of nature vs. nurture or something a little simpler . . . like dumb luck or fate?

As a kid, I was small for my age and bullied unmercifully. Maybe I wanted to protect others and that’s why I went into police work, or maybe I just needed a good, steady job. Something I couldn’t find in the deep bayous of Louisiana when I was still too young to buy a beer.  I’m proud to be a detective. I find solving a difficult case satisfying and I’m good at it. In homicide, you can’t help the victims, but you can give their families closure and take bad guys off the street before they hurt anyone else, and that means a lot.

I thought years of martial arts training and experience bringing down all types of scumbags had prepared me for anything, but nothing can prepare you for the power of voodoo.  But when the woman you love is counting on you, and your daughter’s life is at stake, even voodoo’s highest priest can’t stop you, no matter how bad the odd are against you.

Jack, what about you?  Your thoughts?

I’ve just met Remy, but I have a feeling we have more in common than our readers uncovered. He sure managed the whole Voodoo encounter better than I would have. To be honest, voodoo hexes and that kind of stuff scare the bejeezes out of me. But I’m sure if I’d been thrust into that situation, the Good Lord would have walked me through.

Tell me about your wives, Callie and Gabby. Remy, you first.

I first met Gabby when we were fifteen. Looking back, I can see we were both a little broken. We married two days after high school graduation, and Adrienne, our daughter, was born seven months later. For many reasons our marriage didn’t last. And while I did what I could to support them, that left Gabby a very young single mom, and I didn’t fully appreciate what a tough job that was.

Now that we’ve been reunited, I’ve come to see that I fell in love with her back then for her softness, and how she helped me with so much of the anger I carried. But what’s made me fall in love with her again is her hidden strength.  I thought I was tough as a cop.  I’ve got nothin’ on this mama.

I haven’t spent a day not loving her, now I realize how much I admire her.

And, Jack, what would you like to tell us about Callie?

This time tomorrow, Callie will be my wife. She’s amazing. I don’t think I’ve ever met anyone as selfless as her and I’ve gotta tell you, watching her master the technical wonders of Invisible Surveillance blows my mind. She’s brilliant. I can’t say that enough. I’m one lucky guy.

What is the hardest thing you’ve had to overcome in life so far, Remy?

I’ve had many tough situations to overcome in life. As a kid, my father died and I was dragged from my home to a podunk town in Louisiana where I was bullied and forced to spend the night naked and alone in the midst of the swamp, surrounded by predators of all kinds. Yet believing my wife didn’t love me enough to follow me to Houston where I could find a job to support our family was the hardest thing I ever faced. Having our daughter kidnapped and nearly killed simply shattered my heart.

Grasping the fact that overcoming is forgiveness, and forgiveness is what it’s all about. I forgave my father for blowing his brains out and I forgave my ex for running around. But now that I’m on the other side, I’d do it all over again because forgiving them freed me.

Last up, a quick Round Robin:

Remy: Salty, with just a little bit of spice. Okay, maybe more than a little spice.

Remy: Now you’re getting personal. Who says I wear either?

Jack: I go both ways

Remy: I’ve always driven a Ford, but Gabby stole a Hummer to get us through the rising waters and flying debris of a hurricane. There’s something to be said for the monster tires and high lift of those big suckers when you live near a bayou.

Do you put the toilet seat down?

Remy: I plead the Fifth Amendment on that one.

And, last, do you think you two will go have a beer after this interview?

Remy: Local police departments tend to have an ingrained distrust for all those initialed government agencies, but listening to Jack, I can see what a stand-up guy he is. He was willing to risk his life in the service of our country. I’d not only like to have a beer with him, I’m willing to buy.

Jack: Well, beer bottles and I don’t get along very well (it’s a long family story) but if Remy’s buying, I’d be happy to go anywhere there’s beer on tap.

Awesome!  Thanks guys!  It was great having you, and so enlightening!  LOL!

Now, here’s a little more about Invisible Surveillance and Voodoo on Bayou LaFonte, and don’t forget to comment and check back next week to see if you’re one of my TEN lucky winners!  Good luck! 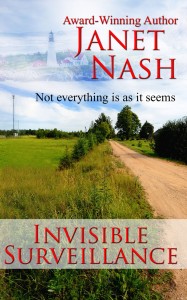 Invisible Surveillance is back…

Now the high tech spying technology is spiraling out of the CIA’s control.  The only one who can stop it is Callie Hunter, along with her CIA fiancé, Jack Oakes.

But Jack has a secret that a madman is using to destroy his credibility.  This, combined with disappearing data, missing evidence files, and falsified records, halt all their efforts and test their faith to the breaking point.

Can Jack redeem himself, or will he lose everything he holds dear?

Will he and Callie be able to stem the tide of this espionage destruction? 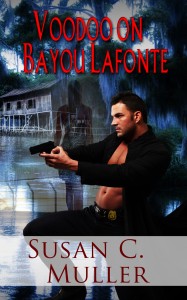 A frantic phone call leads Detective Remy Steinberg racing through the night toward the one place he vowed never to return. With the life of his kidnapped daughter at stake, he willingly faces shotgun-wielding drug dealers, corrupt law-enforcement officials, and a raging hurricane.

Scouring the seedy back alleys of New Orleans for information, he goes undercover at a sinister voodoo ceremony, and struggles to understand the forces of black magic that hold his daughter hostage.

With time ticking down, he battles for his life against a high voodoo priest, but can he face the two things he fears most: the swamp that terrorized his childhood, and the ex-wife he’s never stopped loving?

29 thoughts on “Voodoo in the Bayou and Invisible Surveillance!”