WINNERS!  WINNERS!  I hope everyone had a wonderful Thanksgiving!  My lucky winners from last weeks blog are:

Lyndsey Orr – A copy of The Cop Who Stole Christmas

Email me at christie (at) christie-craig.com with your delivery information and I’ll get your prizes to you.  Congratulations!

Today I bring you another wonderful author and the opportunity to win more books just in time for the holidays!  Let me introduce Heather Ashby, author of Forget Me Not, a part of the Love in the Fleet Series.

OK, Heather, if your book were an ice cream flavor, what flavor would it be?

Snickers Mocha S’mores– Forget Me Not provides plenty of snickers when Sky Crawford, an ADHD Navy pilot, repeatedly shoots off his mouth before loading his brain. Fortunately he’s always focused when he climbs into his MH-60R Seahawk helicopter, commonly known as a “Romeo.” That makes Sky a Romeo Pilot who’s a Romeo pilot. Talk about branding. Mocha Snickers S’mores is Slow Churned, just like the sexual tension in this story, and All Natural, just like the heroine, Daisy Schneider. S’mores? Once you get a taste of Sky Crawford, you will definitely want s’more. And the Mocha part? I’ve heard you’ll need the caffeine for staying up late to find out what happens when Sky and his crew take on drug runners in a Counter Narco-Terrorist interdiction.

Hot, Humorous, Harrowing – What could be hotter than a Navy pilot in a flight suit trying to woo a reluctant heroine? And what could be funnier than Sky Crawford when he trips over the thoughts in his head and says the wrong thing at the right time or the right thing at the wrong time. However, this story is also filled with pathos and suspense as Sky deals with his PTSD and Daisy grieves for her lost pilot husband. Throw in a firefight at sea, and both Sky and Daisy will face their worst nightmares.

Love it!  Now, tell me, what is your favorite thing in the world?

My first grandchild. I’ve been blessed with two books and a grandson coming out in 2013! 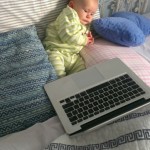 Interestingly, we found out he was on the way the same week my publisher expressed interest in my “Love in the Fleet” series. The baby was born the same week the first book, Forgive & Forget, launched. He arrived at my house for Thanksgiving vacation within the hour of the first printed copies of Forget Me Not arriving on my doorstep. (It’s been rumored Baby Boy is the real brains behind the series. Here’s a photo of him devising a plot twist.)

I can totally relate! Now, I have to know.  What scene was the most fun to write?

The opening scene where Sky and Daisy meet at her Veterinary Clinic. Sky blurts out one faux pas after another while trying to hit on the lovely, elusive Dr. Daisy. I set out to write an opening chapter that would grab the Golden Heart® judges’ attention. Apparently, it worked. Either that or Sky sweet-talked them, which wouldn’t surprise me in the least. Forget Me Not was a 2012 Golden Heart® finalist under its original title: Cat On A Hot Steel Flight Deck. Finaling in the Golden Heart® was my ticket to publication. Because this author leans toward the ADHD side of life—and since I love high, dry, and wry humor—I delight in writing Sky Crawford, who appears in all four books in the “Love in the Fleet” series.

That all sounds great!  Can’t wait to read it!  Can you tell us a little more about it? 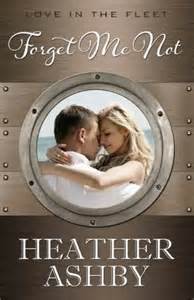 Suffering from Peter Pan Syndrome and survivor guilt, Navy helicopter pilot and renowned playboy, Brian “Skylark” Crawford, swears he’ll never marry, uncertain he deserves happiness—besides there are too many hot chicks to choose from. War widow and veterinarian, Daisy Schneider, swears to love only animals after her Marine pilot husband is killed in Afghanistan—but work fails to ease her loneliness or the guilt that she might have saved him. Between one stray, matchmaking cat and a fiery battle with drug runners at sea, the fur flies as Sky and Daisy learn valuable lessons about life, love, and second chances.

Great!  Thanks for being here, Heather!  Now, two lucky commenters will win a copy of Forget Me Not . . . what is your favorite thing in the world? 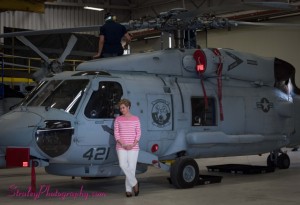 Heather Ashby is a Navy veteran who taught school and raised a family while accompanying her Navy husband around the United States, Japan, and the Middle East. In gratitude for her Army son’s safe return from Afghanistan and Iraq, she now writes military romance novels, donating half her royalties to causes that support wounded warriors and their families. Her debut novel, Forgive & Forget was voted “Best of 2013” by Suspense Magazine. She lives in Atlantic Beach, Florida with her husband and 3 rescue cats.

31 thoughts on “Forget Me Not”