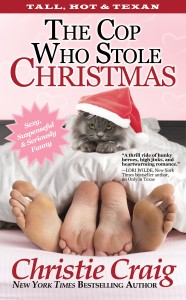 WINNERS!  WINNERS!  The lucky winners from last week’s blog with Ruthie Knox are: Karen Kline, Kathleen O., Becka Lynn, Sarah S., and brandi_75904!  Email me at: christie (@) christie-craig.com with your preference of Amazon or B&N for your e-books.  Congrats!

You know you gotta be careful what you wish for, because you just might get it.  Such is the case for Savanna Edwards in my latest book, The Cop Who Stole Christmas.  What did she want?  “Her ex dead, with a ribbon tied around his pecker.”  Yes, I know that sounds kind of harsh, but in all honesty, she didn’t really want that.  She was just slightly perturbed—okay she was downright fracking furious—when she made that statement in a crowded restaurant in front of a bunch of people. 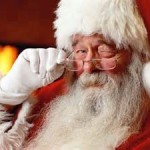 She had a good reason to be pissed.  That morning, Santa had stolen her car.  Well, he didn’t actually steal it . . . The red-suited, unsaintly character connected it up to his wrecker and merrily drove off with it in the cold December morning.  But she can’t really be miffed at the jolly ol’ soul, he was just doing his job.  You see, Savanna’s ex-husband, the cheating louse of a man, used the car’s title to get a loan with Title Mama.  Then he didn’t pay back that loan, nor did he tell Savanna he’d used her car as collateral, and it didn’t even matter to him that she got the car in the divorce.  And there’s not a dang thing she can do about it but stand there and watch him take it.  Making matters worse, she’s wearing a smurf-blue facial mask, her hair piled high on her head congealed with a glop of moisturizing mayonnaise, and nothing but her pink fuzzy house robe to keep her warm.

So, yes, she’s in a pissy mood later that day, and she mouths off about wanting her ex whacked and ribboned.  She honestly doesn’t expect anyone to do it.  She certainly doesn’t entertain the thought of doing it herself.  Heck, getting anywhere close to her ex’s pecker is the last thing she wants—especially after she caught him cheating.  And by caught, I don’t mean she found some lipstick on his collar.  I mean she found him and the other woman making whoopee . . . in Savanna’s bed.  Oh, it also happened to be the same day her mother died from cancer.  So yeah, losing your mother and your marriage in the span of only a couple of hours makes for a bad, bad day.  And even though it’s been over a year, she still holds a grudge against the man.  Just not enough of a grudge to actually kill him.  But when she trips over him in the middle of her kitchen floor—dead, naked, and ribboned—the question is:  Who did it?  It had to be someone who heard her Christmas wish, but . . .  who?  Most of the people around the restaurant are her friends.  And holy hell, why would one of them whack him in her kitchen?

The local cops want to know.  Savanna wants to know.  And so does Mark Donaldson—Savanna’s neighbor—who just happens to be a hot homicide detective from another precinct.  After all, it was Mark who Savanna ran to after finding the body.  He’s had her on his radar since he moved in months ago, but he has this rule about neighbors: Look.  Don’t touch.

Problem is, he gets pulled in.  Pulled into the mystery, into her eyes, into her smiles.  As for touching her, well, what good are rules, if you don’t break them?  Besides, it’s Christmas, and in spite of a problematic murder to solve, there’s just something magical about the season.  But is it enough magic for two people, both burned by love, to learn to trust again?

I have to tell you, I’m a firm believer in the magic of the season.  And a believer in giving love another chance.  I’m one of those second chancers who found love again after it left me on curb the first time.  Mr. Craig, with all his quirky flaws, convinced me to give love another shot. 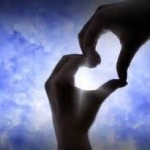 So . . . since it’s already the season, I’ll ask you the question—and answer with caution of course—what would you like for Christmas?  I’m pushing for a couple of rocking chairs for my front porch.  However, since we all know it’s more fun to give than receive, also tell me what gift are you the most excited about giving?  For me, I’m thinking of getting my granddaughter a Kindle Fire.  And this week, one person will win a $50 Visa gift card to help buy someone a special gift.  And . . . one person will win an e-copy of The Cop Who Stole Christmas, and . . . (yes, there is more) one person will also win an ARC of Texas Hold ‘Em.  That’s right, I’ve finally got ARCs of Austin’s story, which is set to release January 28th, so make sure you leave a comment.

And . . . hey guys, make sure you have a Merry Christmas.  Thank you for stopping by.

P.S. For more Christmas cheer, I’ll be on Sue Grimshaw’s blog tomorrow, November 27th, talking about some fun stuff, including why Smurfs seem to always pop up in my stories.  I’ll be giving away a $25 gift card so you might want to stop by! www.romanceatrandom.com

P.P.S. Don’t forget to check out the Montgomery County Library Festival’s online auction!  I’ve donated baskets with wine, Shadow Falls wine glasses, a Shadow Falls T-shirt, chocolate, a pizza cutter, and six autographed copies of Christie Craig books.  Plus, an ARC of Texas Hold ‘Em.  So go put in your bid.  It’s easy, just go to: https://www.32auctions.com/login  to register and then you can bid at: www.32auctions.com/mocobookfest

And remember the money goes to Montgomery County Library to help support their book festival, so it’s for a great cause!

50 thoughts on “All I Want for Christmas is…”