I’m thrilled to be back, and recovered (mostly) from RWA Nationals in Atlanta.  But I did have a fantastic time!  Now it’s back to business here at Laugh, Love, Read.  And I know you are ready to meet another fantastic author friend, aren’t you?

Well, I have just the gal for you!  I’d love for you to meet the wonderful Terri Osburn as she shares with us about her book, Meant to Be, and you’ll definitely want to hang around and leave a comment because not only am I giving away two copies to some lucky commenters, but Terri has been gracious enough to offer up one autographed copy to a lucky winner!

So, Terri, let’s start with which three words best describe your book?

I like this one.  Flirty, funny, and full of angst.  (I think I cheated there, but I’m sticking with it.)

Have your parents or family read your books and/or love scenes?  How do they react and how does that make you feel?

My mom and sister are actually beta readers for me, so they read everything before it goes out. Sometimes before my editor. Sex has never been a taboo subject in my family, so the sex scenes are no big deal. If any of my other family members have read it and been uncomfortable, they haven’t mentioned it yet. But that would be a fun conversation I’d love to have.

What have you learned about people since becoming an author?

I’ve learned there are more people sensitive to profanity than I would have guessed.  That seems to be a common mention in the unhappier reviews.  I still appreciate that they took the time to read the book, but I really didn’t see that one coming.

OK, I always like to end on a serious question . . . they’re casting your book in a movie.  Who’s playing the leading roles?

Since I never picture actors in the roles of my characters, this one is hard. For Joe the hero, I had to do some searching. Joe has really blue eyes and a heart-stopping dimple. I came across Scott Elrod, who is a German actor, and I have no idea how good his English is, but he certainly has the look.

Beth is the typical girl next door, with green eyes and curly, chestnut hair. If Amanda Seyfried would go brunette, she might fit the role really well. She has that innocence the person playing Beth would need. Now that I think about it, these two actors could really bring my book to life. 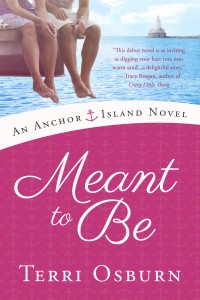 Fantastic answers!  Now I’d love to hear more about the book and where we can find it . . .

Beth Chandler has spent her whole life pleasing others. She went to law school to make her grandparents happy. She agreed to marry her workaholic boyfriend, Lucas, to make him happy. And, despite her fear of boats, she took a ferry to see Lucas’s parents just to make them happy.

While suffering through a panic attack on the ferry, Beth meets a tall, sexy stranger who talks her down from her fear—and makes her heart flutter in the process. Soon, she has a new reason to panic: her gorgeous, blue-eyed rescuer is Lucas’s brother, Joe.

But could she ever leave her fiancé for his own brother…even if Lucas is more focused on making partner than on making their relationship work…and even if Joe turns out to be everything she never knew she wanted?

Thank you for being here, Terri!  Now, everyone else, don’t forget to leave a comment for a chance to win your very own copy of Meant to Be (including that autographed copy!)

Born in the Ohio Valley, Terri relocated below the Mason Dixon line in the early 1990s after experiencing three blizzards in eighteen months. Seeking warmer climes, she landed in Nashville, did a stint in Arkansas, and eventually moved to the East Coast, where she settled near the ocean. In 2012, she was named a finalist in the Romance Writers of America® Golden Heart® contest for unpublished manuscripts. An agent and contract soon followed. Her debut release, the first in her Anchor Island Series, MEANT TO BE, was released in May 2013, with book 2, UP TO THE CHALLENGE, to follow in January 2014.