Hi, my friends . . . you are in for a treat today!  I’m thrilled to have Shauna Allen back and to learn more about her second release, The Halo Effect.  Her writing is fresh, sassy, and witty—and chalk full of sexy bad boys.

Two lucky commenters will win a copy so read on and please give her a warm, Laugh, Love Read welcome!

So, Shauna, let’s start with your heroine, Braelyn.  Is she anything like you?  What qualities do you envy in her?

Well, she may have tiny pieces of me in there (as authors, don’t most of our characters?) but she is very different, too.  What we’d have in common is our fierce love of our children, even to the point of embarrassing them sometimes, LOL.  But what I wish I had of hers would be her gardening skills (I kill stuff with my brown thumb,) her eternal patience with a roomful of children as a teacher, and her petite little body.  I wasn’t so blessed.

What did you want to be when you were a child?

I’d like to say a writer, but that wouldn’t be altogether true.  The first job I remember wanting was an airline stewardess.  We travelled a lot, so I guess that job seemed really cool to me.

What is the last great book you read?

Oh, it’s been more than one.  But the last two that made an impression on me, and they’re polar opposites, were “The Best Man” by Kristan Higgins and “Real” by Katy Evans.  I even Tweeted Katy to tell her how much I loved that book . . . Awesome!

What scene in The Halo Effect was the hardest for you to write and why?

Well, I don’t know if there was any particular scene that was “hardest.”  Noble, in general, gave me a few fits.  He’s so broody and quiet and internalizes everything.  He’s nothing like Jed from the first book who was so demonstrative with his emotions, which I found much easier to write.  Noble’s mystery is part of his allure and true to his character, but also harder for me to write.  I know, I know, my own fault, LOL.  But he’s also such a gentleman and quick to come to the rescue, including in this scene where he’s come to help Braelyn, but she’s learning just how hard he is to get to know.  Take a peek:

Noble heaved the oven away from the wall a few inches and peeked. Damn. The cord was snugly plugged into the wall. All right, time to see about turning the bad boy on. One of the mismatched knobs was barely holding on to its post, but he was able to crank up the heat.

He tried to ignore her, but her scent overpowered his senses in the tiny room as she sidled up next to him. Sweet and floral with just a hint of something darker. He nearly groaned.

“So,” she said as he checked the stovetop burners, “you from Texas, Noble?”

He glanced over. Her huge, amber eyes glowed with curiosity. “No.”

The burners worked fine. He shut them off. With nothing to occupy his hands until he’d given the oven time to heat, he shoved them into his pockets and propped his hip against the counter. “Arizona.”

“Hmmm,” she mumbled as she hauled herself up to sit on the counter next to him, her hand brushing his arm. “We came to Texas because it’s where my grandma was from and she told me lots of stories about growing up here.” Her soft breath hitched as emotion filled her eyes. Obviously she loved her grandmother a lot. A thing foreign to him. “So it seemed the natural place to go when we needed a new home.” Her face brightened as she forced a smile and tucked away her nostalgia. “So what brought you to Texas?”

He rolled his neck and looked away. “This and that,” he hedged. He hated to talk about his past. It was ugly and he preferred to let it lie.

“How long have you lived here?”

He sighed. “A long time.” How much longer did he have to give the damn oven to preheat?

Her petite foot tapped the cabinet in time to the music. He didn’t meet her eye. “I love it here. The weather for one thing is much better than Indiana. Do you like it better than Arizona?”

He grunted a noncommittal answer and shoved away from the counter. He opened the oven and reached his hand inside. It was still ice cold. He fiddled for several minutes before deciding on the most likely problem. He turned the dial back off and faced her again.

“I think—” He stopped mid-thought. She looked a touch pissy. Her amber eyes sparked with dark shots of gold and her fingers were drumming rhythmically against her perch on the counter. “What?”

She tilted her head. “Do I disgust you or something? Have bad breath?”

“Do you find my Hoosier manners to be unacceptable down here in Texas then?” she sat forward, her palms braced next to her thighs, her head tilted.

He trained his eyes back up to her gorgeous, albeit frowning, face. “No.”

“So, are you generally just a pseudo-mute man with the conversational skills of a sloth, then?”

She jumped off the counter, her bare feet landing softly on the linoleum floor. “See? I’ve been trying to make polite conversation with you. You know, be friendly. Get to know you?” She ran a frustrated hand through her hair. “And you’ve all but ignored me.” She turned around and seemed to be talking to herself. “Not that I’m surprised. You’ve been doing that since we met.” She spun back around. “Why do you come over here if you don’t even like me?”

Holy Moses. If she only knew. “Believe me, I wouldn’t do a damn thing for you if I didn’t like you. I’m not that charitable.”

Her mouth popped open then she snapped it shut. She studied him from under her lashes. “Really?”

He barked out a rough laugh. “Really. I’ve never really been known for my social graces.” He shrugged. “Sorry.”

Her million-dollar smile lit up the entire friggin’ room and his stomach tied itself into knots. “That’s a relief. And here I thought I was torturing the good-lookin’ guy next door with my crappy house and teenage son because he was too nice to say no.” She sagged against the counter. “Phew.”

She thought he was good lookin’? He filed that tidbit of information away for later.

Oh, I see what you mean, LOL!  Well, it still sounds like a good read, and I’m sure they get it together eventually, right?

Yes.  Thanks in part to their ever-vigilant Cupid, Michael.  But that’s a whole other story, LOL.

Well, I’m intrigued.  Can’t wait to read it!  Can you give us the blurb and tell us where can we pick up The Halo Effect? 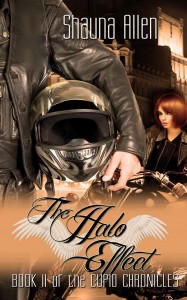 Love Detail’s favorite angel has his sights set on his next target: the stoic and mysterious Noble Blackfeather.  And it just may prove to be his toughest case yet.  Noble’s reclusive ways keep his angel at wing’s distance, and love even further.  But he’s not playing a part – he’s truly masking a painful secret and a profoundly wounded heart.

Noble’s been paired with Braelyn Campbell, the cute single mother next door.  She’s adorable, friendly, fun…everything Noble needs.  This should be a Love Squad slam dunk.  Except she’s making a fresh start in Texas to protect her son from a volatile ex, and she’s not about to risk her heart or her son on another man.  Even if he’s sexy as sin and always coming to her rescue.

But, reluctantly, they are drawn together – thanks to their cupid’s dogged efforts and a whole lotta chemistry.  Can the girl next door learn to trust again and help heal Noble’s wounded heart? Together, can they save the lost, hurting boy she’s raising?  Can the angels help it happen before it’s too late?

Also, the first book in the series, Inked by an Angel, will be free on Amazon for two days only, today and tomorrow, so you’ll want to take advantage of that!  http://tinyurl.com/afpfrd2 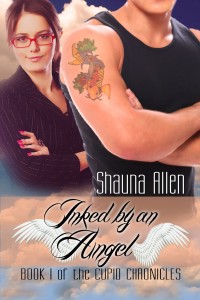 Awesome! Thanks for being here, Shauna!  Now two lucky commenters can win a copy of The Halo Effect.  Check back next week to see if you’ve won and Good Luck!

Shauna grew up an only child with two open and loving parents in Central Texas.  She’s married to her high school sweetheart and is the mother to three fantastic (no, that’s not a typo!) teenagers.

When she’s not writing, editing, or acting as a personal assistant to a NYT Bestselling author, Shauna enjoys reading, movies with Gerard Butler, vacays to the beach, and hangin’ with the kiddos–even if they don’t like hangin’ with her! 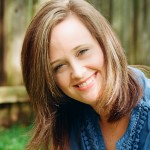 Shauna would love for you to visit her at her website and blog at: www.shaunaallen.com