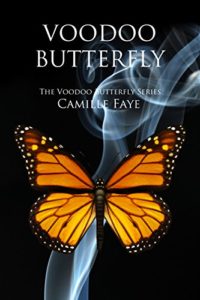 Last year, Camille Faye entertained on my blog with tales of her Butterfly Voodoo series. I’ve read the first three books in the series, and I’m eagerly awaiting the release of the next book. So I reached out to Camille to find out what she’s been up to and when I can expect her next release.

In the series, my main character, Sophie Nouveau, unexpectedly inherits a New Orleans voodoo shop. Only problem? She knows nothing about voodoo or her family’s secret power. The women in Sophie’s family are Mind Changers, specialized priestesses who have the magical ability to change evil people good. Throughout the series, Sophie learns to harness that inner power. I cover different types of creatures than in typical paranormal books, drawing on New Orleans and Cajun culture, lore, and flair. These creatures include the rougarou, skinwalkers, angels, bokors, loa, and jinn. 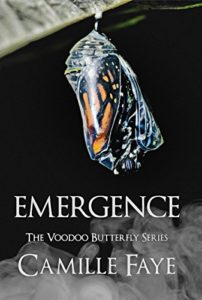 The Voodoo Butterfly Series actually began with a dream I had in New Orleans. The first flash of the dream showed me a woman walking through the French Quarter at night (that character became Sophie). I knew that she wanted someone to attack her because as soon as they touched her, their mind would change from evil to good. The second flash of the dream showed me at Saint Louis Cathedral in NOLA absolutely covered in monarch butterflies. That plague of butterflies became my opening scene. As I developed Voodoo Butterfly, I decided that since voodoo and Catholicism are such vital parts of the culture in New Orleans, I would make my main character unexpectedly inherit a voodoo shop.

Sophie can be stubborn–ahem, determined–which is a characteristic we share. She wants to make the world a better place, stands up for her beliefs, and cherishes family. That’s me, too. Other than that, she was made up in my imagination.

All of the authors on that list have formed my ideas about good storytelling and what makes a good book. Harper Lee’s Atticus Finch, Mark Twain’s Huckleberry Finn, and Roald Dahl’s Matilda showed me how normal people can fight injustice and change the world. All of those themes are important to Sophie’s story. I loved Louisa May Alcott’s portrayal of family and sisterhood in Little Women. Family is important to me and one of Sophie’s greatest desires is finding a feeling of belonging and learning about her family history. Stephenie Meyer’s Twilight Saga got me excited about reading again and inspired The Voodoo Butterfly Series. The covers were inspired by hers, too.

You can read more about my favorite books here: https://www.camillefaye.com/blog/2018/5/27/my-fave-books-of-all-time

The fourth book, Courtship, is currently in edits with my publisher and is slated for release on May 27, 2020. In this installment, Sophie will tangle with a skinwalker, which is a Native American shapeshifter and all-around nasty creature. There will be a wedding, three major characters die, and a huge battle scene ensues in the middle of New Orleans, so I’ve whipped up quite a lot of obstacles and conflict for Sophie.

I plan to submit the final book in the series (Book 5) to my publisher in June 2020. I’m not sure what project I will work on after that, but I have some ideas about a new series in either urban fantasy or paranormal cozy mystery. 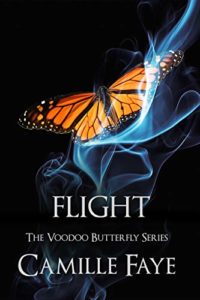 Voodoo Butterfly released in audiobook format on April 4, 2020. It is available on Audible, Amazon, and iTunes.

2 thoughts on “Camille Faye is Back!”