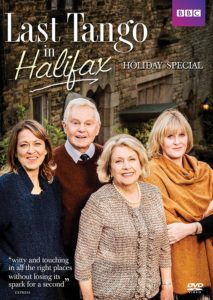 Recently, hubby and I have been binge watching some series on Netflix and Prime.  For some reason, we’ve been doing a lot of British shows. We’ve finished D.C. I. Banks, then we went to Happy Valley and we are now watching Last Tango in Halifax.   I’m afraid I might slip up soon and use the word bloody, when I’m upset at something.

It occurred to me that binge watching is sort of like reading in that you don’t have to wait a week or longer to read another chapter.  I think we just follow stories better when we don’t have a week between episodes.

But that isn’t true when we refer to book series.  And yes, I got plenty of pissy emails saying I left a reader hanging and now they have to wait until the next book.

I won’t deny that as a reader, I want to be able to grab the next book right away—especially if there’s a hook at the end.  And when I have to wait, I’m biting my nails.  And yes, as a writer, I use hooks at the end of my books in series.  It’s part of good storytelling, leaving a reader, or viewer, hanging on, feeling just a little desperate for the rest of the story.

To be honest, if there isn’t a hook, I might very well finish the book and grab a different series.  A friend of mine was just talking about a series she’s binge watching and she said, “I may watch the first season and then move to something else.”  And having watched that series, I can tell you there isn’t a hook at the end.  So it might be easy for her to do that. As an author, that isn’t what I want.  I want the reader to be chomping at the bit for the next book.  And the way to do that is to leave them with some questions.  But I also know waiting is hard.

I know a lot of readers who wait until a series is finished before starting it.  And recently, I’m hearing about a lot of Indie writers who are actually finishing a series before putting it up.  Then releasing each book in the series a week or two apart.  As a reader, is that what you would prefer? Or don’t you mind if one book from a series is released every year?

Do you binge watch shows?  What shows are you watching now?