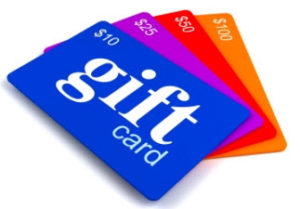 This is the question that I think so many of us are debating this holiday season.  Just the other day, I was walking behind two women and they were talking.  And yeah, you know me, I eavesdrop.  One of them said, “This year we are doing the $25 Christmas gift card exchange.” The idea of just trading cards didn’t thrill me.  It’s like pulling $25 out of your purse and exchanging bills. Maybe the fact that it’s from a certain store might be the surprise, but . . . uh, no.  It didn’t feel festive.

Don’t get me wrong, I see the pros and cons of a gift card.  And I’ll admit, I’m about to go shopping for cards myself.  But have you ever given someone a surprise gift that was just so darn perfect?  I mean, something that they really wanted, but either didn’t know they wanted it, or had forgotten they wanted it?  Or didn’t think anyone would get it for them.  Something that is so perfect that their expression is worth ten times more than you paid for the gift.  I love giving those kinds of gifts.  It just warms my heart and makes the hours I spent fighting the scrooges at the mall so worth it. 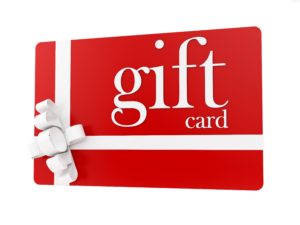 Ahh, but have you ever had to buy a gift for someone, and you didn’t have a clue what to get?  I mean, they are very selective—yes, that’s a nice way to say picky, but that’s not really a bad thing. But you know where they love to shop. So you get them a gift card from there. Is that so wrong?  No?  Maybe? I mean, isn’t it better than getting someone something that they won’t use or don’t like.  Or even worse, will use as a white elephant gift next year.  I’ve gotten a few of those.

And how many gift cards have you gotten that you didn’t use?  Sadly, I have a few.

But if you ask someone what they want and they say… “Oh, I love shopping at Marshalls. Or I need t-shirts and I usually get them at Target.”  And yes, there are people who love shopping.  Shopping is part of the gift.  My daughter always plans a day after the holidays where she will head out with all the gift cards she received and shops till she drops.  And my granddaughter has decided she likes that, too.  It’s a ritual. Their thing.  So is it so wrong to get them what they want?  I don’t think so. And frankly, if I had something in mind that I want from a certain store, I’d like getting a gift card from that store.

But here’s the little issue.  I don’t want to just give them cards.  No, I need something to go along with the card.  In the Craig house, we give lots of little gifts, some are gag gifts, some aren’t.  But now these gifts can’t be pricey, or it takes away from the value of the gift card.  So, the whole gift-card giving makes the holiday season easy, doesn’t pan out.  No, it makes it a bit harder, because now the gifts have price limits, making it more challenging.

So I give gift cards, but I don’t just do gift cards. What about you?  Do you do them?  Do you like giving them?  Like getting them?  Do you feel it’s taken some of the gift-giving joy out of the season?  Do you think Scrooge invented them?

I’m giving away a C.C. Hunter t-shirt on my C.C. Hunter blog this week. Pop over and enter: http://cchunterbooks.com/blog/.