There is an abundance of new shows out this month and I, for one, am paying attention.  You know I’m working on a book and I work around ten hours a day, but when I move out of my office, I usually either whip up some dinner or order in and watch a few shows.

Here are the show I’m watching:

It’s what I would call a speculative fiction.  A young girl survives a plane crash unharmed.  But overtime we see she has powers.  A detective ends up taking her in and trying to protect her from the unknown.  But the question becomes do they need protecting from the child?

Now can I say I watch this one with one eye closed?  It’s spooky.  A young mother, with three girls, who does not believe in demons and such, is hired to work with a group of religious investigators.  Basically, she tries to disprove that demons, ghosts and other creepy things don’t exist.  But let me tell you, there’s a lot to disprove.  It’s scary, it’s really creepy.  But I kind of like it.

I love this one guys!  It’s a lot like my humorous romantic suspense novels.  A sassy, kick butt army veteran becomes a private investigator who stands up for the underdog.  She’s flawed, so very flawed, but you have to love her as she always sets out to protect someone who deserves protecting.  And she finds herself up to her eyebrows in trouble fighting bad guys.

This one is a legal show about a new judge who is determined to make her court fair to those who are not getting justice.  She’s creative, she’s got guts.  She’s the kind of judge we would all love to think wears a robe and determines what’s right and wrong in courts.

Jimmy Smit and his daughter are lawyers with a tumultuous relationship who take on the injustice of the world one client at a time.  It’s largely a family drama with characters who fight for the underdogs.

As I’m writing the descriptions of what I’m watching, I realize how close my interest in shows is to the plots I choose to write.  Paranormal elements, ghosts, sassy characters, underdogs that need championing, and a touch of danger and suspense.

In Don’t Breathe a Word, there are for sure several underdogs.  There is injustice that people are trying to rectify.  There are threads of past family drama and how it effects characters years after the fact.  The sass level is pretty high.

In my C.C. Hunter Mortician’s Daughter series you totally get the paranormal element.  Poor Riley is faced with spirits left and right.  However, you still have the underdogs, and you get the sass.  If not from Riley, then from Kelsey.  That girl calls it like she sees it. 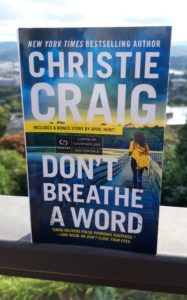 Hurry! Download your copy of Don’t Breathe a Word for only $2.99! “Romantic suspense fans will mark this as a series to watch.” –Publishers Weekly

ONE FOOT IN THE GRAVE 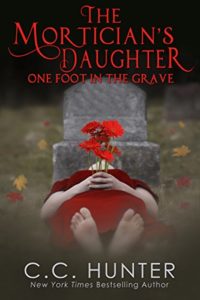 The first book in my C.C. Hunter YA Mortician’s Daughter series, One Foot in the Grave, is on sale for only .99 cents! But Hurry, this sale won’t last long! “This series is the perfect blend of eerie paranormal action, drama and plenty of will-they-won’t-they scenarios with to-die-for crushes.” —RT Book Reviews

1 thought on “What Are You Watching?”