June 18th, Three Heartbeats Away, the final book in my Mortician’s Daughter series will be released. I can’t wait for you to read it! I’m so excited to share the rest of Riley’s story with you. And I don’t want you miss a minute of it. There’s so much going on.  With Ghost, boyfriend, parent issues happening all at once, she’s got her plate full. 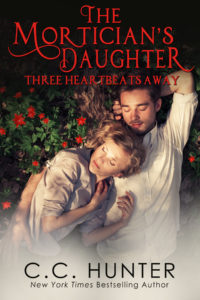 At least until they end up at Riley Smith’s door.  Her latest spectral visitor is a murdered bride with a need for revenge, and not necessarily for the person who killed her.  Never mind that killer is about to strike again.  Riley’s determined to help, but is missing Hayden, the hot, ghostly boy who’s always had her back.

Living, breathing Hayden is awake, which means his spirit isn’t around to flirt with Riley anymore.  Worse yet, the “real” Hayden doesn’t remember her. Their connection had been so strong.  Did his feelings for Riley just disappear into the ether?

As Riley gets closer to finding the bride’s killer, other secrets are revealed: secrets that change everything Riley thought she knew about her parents.  But before she can completely unravel the mystery of her past, Riley will need to escape the murderer that threatens her future. 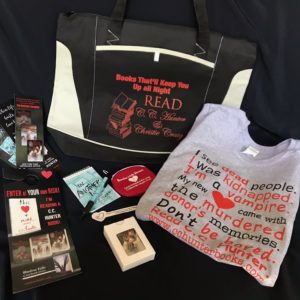 Once you place your preorder, send me a link or a screen shot of your order to cc@cchunterbooks.com, and you’ll be entered to win this cool tote filled with a t-shirt, a deck of Three Heartbeats Away playing cards and all this other amazing swag (promotional stuff).

Do you preorder books? Do you prefer to wait until they come out to order them? Do you tend to buy them in a brick and mortar bookstore or online?