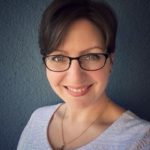 I’ve got a 2017 RWA® Golden Heart® Winner Christina Britton as my special guest on my blog this week. Christina developed a passion for writing romance novels shortly after buying her first at the tender age of thirteen. Though for several years she turned to art and put brush instead of pen to paper, she has returned to her first love and is now writing full time. She spends her days dreaming of corsets and cravats and noblemen with tortured souls. And she has her exciting debut novel, With Love in Sight, releasing a week from today! Now if you’re a fan of Regency era romances with a dashing, rogue hero like I am, you’ll adore With Love in Sight.

With Love in Sight 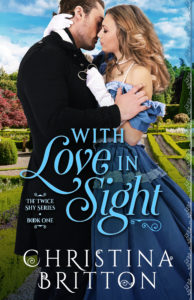 An aging spinster at 26, all Imogen Duncan sees ahead of her is a life of servitude to her overbearing mother. Her London Season has passed and her desperate shyness and reserved demeanor have destroyed any chance for a match. As her younger sister Mariah begins her own Season, Imogen believes her chances for excitement are well and truly lost. But a case of mistaken identity and an accidental kiss bring unexpected adventure into her life.

Burying his guilt from a decade-old tragedy beneath a life of debauchery, Caleb Masters, Marquess of Willbridge is content enough to meet willing widows in dark gardens to numb the pain. But he is wholly unprepared when an innocent miss stumbles into his life, turning his superficial world on its head.

Drawn to the rogue that mistakenly stole her first kiss, Imogen finds not a suitor, but a friend. Free to be herself for the first time in her life, she begins to see a new beauty in the world around her…and see a strength in herself she never knew she possessed. But when friendship turns to passion, Imogen will accept nothing less than Tristan’s heart. Can a healing of the past lead to the promise of a future together?

What drew you to writing historical romances?

Truthfully I never considered writing anything else. When I was young I delved into everything I could: horror, the classics, children’s books. I read Stephen King when I was eleven! But a chance visit to a book store when I was thirteen sealed my fate. I browsed the romance section, looking for something new, and picked up the first book that caught my eye, Kathryn Kramer’s Under Gypsy Skies (and yes, I still have that very dog-eared, beloved copy). There really was no turning back after that. I devoured every historical romance novel I could. From medieval to the old west, Victorian to early Americana, nothing was off limits. Now, the minute I sit down to write, my mind automatically turns to the words and mannerisms of the past. To be utterly truthful, the idea of trying to write a contemporary makes me break into a sweat!

What made you focus on the Regency era in England for your novels?

One author did that for me: Amanda Quick. The second I picked up one of her novels I was hooked. There was something about the world that called to me, something elegant and proper, yet wickedly wonderful. It was around that time I discovered Jane Austen. How could I fail to be utterly entranced by it all? The elegance of the language, the manor homes, the lords and ladies and glittering balls all worked their magic on me. I adore everything about it, and can’t imagine writing anything else.

I love all the feisty, outspoken, daring heroines that fill my shelves, but I couldn’t relate to them.I wanted to read about a character that was more like me. So I picked up my pen and wrote her. Imogen is incredibly shy, and introverted, and horribly awkward with strangers—all very much like myself! Truthfully I love writing heroines that have to work harder at dealing with things that others find easy. It makes their happily ever afters so much more satisfying to me.

What was your favorite scene to write?

There’s a scene in the book where Imogen and Caleb go star-gazing. It’s just so quiet and romantic and sweet. I adored that scene. I tend to emotionally torture my characters throughout my books (and giggle while I do it!), so the scenes where they can truly connect and enjoy each others’ company are few and far between, and thus extra special to me.

How has winning the Golden Heart affected you?

I admit most of the time it all seems a dream. How could I have won that award? I still routinely stare at my Golden Heart necklace and try with all my might to get the reality of it to sink in. But in those moments when I know in my heart it actually happened it’s glorious and humbling all at once. And it makes me want to work harder than ever before.

Excerpt From With Love in Sight:

“You’re probably wondering what prompted me to act in so forward a manner. The truth of the matter is, I need you for something.”

All manner of images flashed through his mind at that, not a one that he could possibly share with her. He cleared his throat. “Anything at all.”

She drew a deep breath. “I need you to help me have an adventure.”

“An adventure.” She saw his blank look and sighed, the pain he had noticed in her eyes earlier returning. “You see, Lord Willbridge, I know full well my situation. I am aware I will never marry, that I will forever live on my parents’ charity, and my siblings’ after that.”

Anger rushed through him at her words. He was vaguely aware that others thought of her that way. Hell, he had believed the very same thing when he first met her, which brought him no little shame now. That she believed it, however, made it all too real.

And she should not have to settle for such a life.

“It does not have to be. You could still marry, have a family.”

But she was looking at him calmly. “It’s fine. I’ve come to terms with it. I’m not afraid to face my future.” She drew herself up, and he was touched by the quiet pride that shone from her.

“But I would very much like,” she continued in a low voice, “to have some memories to bring with me into that future, my lord. To know that not all of my life has been planned and prescribed and…wasted.” Her slender fingers gripped at the fabric of her skirts. “I want to know I lived a bit. I want an adventure or two to warm me. Nothing extravagant. Just to know that I had enough bravery to try something new and daring, before the chance was lost forever.”

She only wanted a bit of an adventure? He would do that and so much more for her if it would bring a smile, even fleetingly, to that sad, too-serious face.

And who knew, maybe this was a way, however small, to begin making amends for his past sins. It would not bring Jonathan back, would not erase the pain of the past decade. But at least he could make a difference for the better in someone’s life.

“Imogen, don’t you think you had better start calling me Caleb? After all, a good adventuring would be stifled by such formalities.”

It took her a moment. But when the realization hit her that he had agreed, her entire being lit up. Not just her face, which had broken into the most glorious smile he had ever clapped eyes on, but her body as well. She straightened, and it was as if a bolt of lightning had struck her, filling her with so much energy that she fairly crackled with it.

And then she did the thing he least expected. She rushed at him, flinging her arms about him. In his shock he automatically clasped her to him. He experienced a rush of awareness as he felt every curve of her pressed to him, the warmth of her through her thin gown. The clean scent of her drifted up to him, making him slightly dizzy. And he knew he wanted nothing more than to kiss her.

He stilled, his arms gripping her a bit tighter. He had no wish to ruin their friendship. He could imagine her shock if he followed through with the urge. He had gotten away with accidentally kissing her once; he did not think he could talk his way out of it a second time.

In honor of the release of Christina’s debut novel With Love in Sight on 3/27/18, She’s having a pre-order giveaway! One winner will receive a selection of signed historical romance novels, Twinings tea, a vintage 1930’s depression-era amber glass teacup, and a With Love in Sight tote bag!

Simply pre-order your copy of With Love in Sight, take a screenshot of your receipt, and upload it along with your contact information to the form found here!: https://goo.gl/G2v2cj
You can also find a link to the form on Christina’s website!: http://christinabritton.com/

For every copy of With Love in Sight pre-ordered, whether digital or hard copy, 1 entry will be put in the contest. The contest closes at midnight March 26, 2018. 1 winner will be chosen at random, and will be contacted early April 2018. Continental United States only please. The winner will have 1 week to reply with their shipping information before another winner is chosen. Good luck to all!

Pre-order With Love in Sight today from Amazon, Barnes & Noble, iBooks and Goodreads.