Do you know how after New Year’s you look back on the past year and you kind of feel you wasted too much time?  I was doing that, and then I stopped and realized maybe I didn’t do everything I wanted to. Yeah, I still haven’t lost the weight, but I did accomplish a lot.  I visited both my parents, one in California, one in Alabama. I did fifteen writing related events, most of the out of state. Which means I had the pleasure of meeting many of you at conferences and book signings, and I’m looking forward to meeting more of you in 2018. 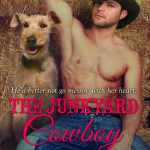 In July, I released the third book in my Tall, Hot & Texas series; The Junkyard Cowboy. I had a lot of fun writing about Jennifer Peterson, who in her search for the perfect man has found a sure-fire formula for identifying the perfect man. Statistics seem to show that if she narrows her search to men of certain careers and physical attributes, she’ll have a better shot at success. So now, she’s on the hunt for not-so-well-endowed, short and hairy podiatrists or funeral directors, who’ve been dubbed less likely to cheat than their tall, good-looking counterparts.

But when a hit man runs Jennifer off the road and chases her into an old junkyard. The sexy cowboy who runs the place may be the best man to keep her alive, but he’s also the type to most likely put her heart in jeopardy. Should she trust her head or throw all logic out the window for the one guy who may be worth the risk? 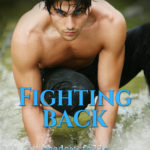 Last August, I released my C.C. Hunter book, Fighting Back. In case you avid Kylie and Lucas fans missed it, this is the final short story about this couple. Just because they’re in love, doesn’t mean it’s smooth sailing. Oh no, Kylie and Lucas face their biggest challenge yet when Lucas struggles to balance his added responsibilities with the werewolf council with his commitment to Kylie. Things go from bad to worse when Lucas’ life is in danger. But while their future may be uncertain, Kylie will do whatever it takes to save the life of the only boy she’s ever truly loved. 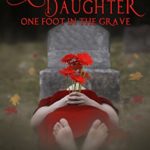 Then last October, I released the first in my three book YA series called The Mortician’s Daughter: One Foot in the Grave. It’s about Riley Smith, whose dad is a mortician, and his clients keep following him home. Only Riley can see these ghosts, and they usually want some kind of help from her. And it’s never easy.  For those of you waiting for the second book, it will release in July. 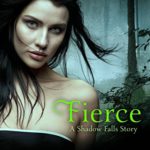 Finally in December, I released my YA novella, Fierce, werewolf Fredericka Lakota’s story, previously only available in my anthology, Almost Midnight. Even years after being abandoned by her rogue werewolf father, Fredericka’s still never found a place for herself in Shadow Falls. And now,  Fredericka’s life has gotten more complicated: she’s learned her father has died, the death angels from the falls are calling to her, an ex won’t let her go, and she may be seeing the ghost of a missing woman who needs her help.

And while these two books haven’t released yet, I wrote This Heart of Mine and Don’t Close Your Eyes. 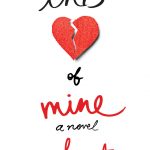 Reviews for This Heart of Mine are rolling in and I’m honored that reviewers are connecting to with this book.  This is the book about a heart transplant that was inspired from my husband’s transplant. It releases February 27th. 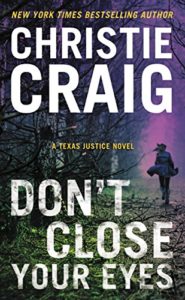 I also wrote, Don’t Close your Eyes, which releases August 28th.  Now for my readers, I’ll warn you that this isn’t as humorous as my other Christie Craig books.  It’s a story about a young woman with a repressed memory that leads the Anniston, Texas Cold Case cops not to just one body, but two.  It was originally written for a screen writing contest back in 1997.  I won, but then didn’t pursue it.  Seven years later, I pulled it out and started it as a book.  I entered it into a contest, and it took first place again. But then, I sold my humorous romantic suspense novels and put it on the back burner.  In 2017, I decided to return to it. There was something about that story that wouldn’t let me forget it even after twenty years.  I enjoyed writing the slightly darker story, so my agent sold it as a series titled, Texas Justice.  There are three Cold Case Cops and each one will get their story.

You can find all of these books at Amazon and Barnes & Noble. If you missed one of the new releases, go grab a copy. And you can also preorder the This Heart of Mine and Don’t Close Your Eyes.

So you see, while I do believe I spent a little too much time of 2017 playing Spider Solitaire. I did do a lot.  What were you busy doing in 2017?  One person who leaves a comment and tells me they have read one of my books, will receive a $10 Amazon gift card.