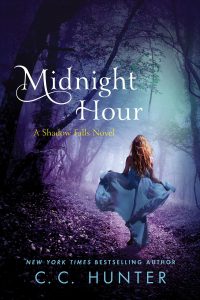 It’s here! The day I’ve been waiting for. It’s the release of my CC Hunter Midnight Hour, the final book in my Shadow Falls saga. Yes, it’s been a long and thrilling  journey, and I wanted to leave you with an exciting last look into the lives of Kylie, Della and Miranda. And while all three girls are in Midnight Hour, this is Miranda’s story, and her turn to shine. I’m so proud of how far she has come. She’s gained confidence and learned to rely on herself. Now, you can read Midnight Hour for yourself. You can buy Midnight Hour at Amazon, Barnes & Noble, iBooks and Kobo.

Prepare to fall in love all over again. . .

Being a dyslexic witch is a curse in itself, but Miranda Kane’s time at Shadow Falls has helped her harness her magical powers. Now, just as she’s finally mastered them and is preparing to graduate with her friends, a near-death experience threatens to ruin it all.

Miranda awakens in the hospital with a mysterious tattoo that no one can explain. As she struggles to make sense of it and questions her feelings for a certain irresistible shape-shifter and a hot new guy the strange markings begin to spread all over her body, leaving her desperate to find answers. But before she can solve that problem, a new one arises: her sister is missing.

Has her sister been kidnapped? Miranda will risk her life to find out. Will she live to share the day she’s worked so hard for with her friends? When the clock strikes midnight, will Miranda make it to her graduation at Shadow Falls?

To celebrate release day, I’m giving away one copy of Midnight Hour to someone who leaves a comment telling me who their favorite Shadow Falls character is and why. (This giveaway is for US residents only. And if you’re reading this on Goodreads, you must comment on my actual website blog.)

For a limited time the ebook version of Reborn is on sale for only $2.99! Yup, it’s a real bargain. And even if you’ve read it, I bet you have a friend who hasn’t. You can order it for her online and have it delivered to her Kindle or NOOK for Christmas, or her birthday, or just to let her know you’re her friend. But this sale ends on October 31st, so you better order today at Amazon, Barnes & Noble, iBooks and Kobo.

Enter Shadow Falls: After Dark and meet a vampire named Della, who’s about to discover what her own story is meant to be. . . .
Della had the perfect life-the family, a boyfriend, and a bright future-until she was turned, and abandoned by everyone she loves. She takes refuge at Shadow Falls, a camp for teens with paranormal powers. It’s where she and her best friends, Kylie and Miranda, heal their heartbreak with laughter, and where Della is training to be a paranormal investigator-and she refuses to be distracted. That means there’s no time for romance with Steve, a gorgeous shapeshifter whose kisses melt her heart.
When a new vampire named Chase shows up at camp, Della’s world is thrown into even more chaos. Arrogant and annoyingly sexy, Chase is a mystery . . . and the only mystery Della likes is one she can solve. She can’t solve Chase, at least not while she’s dealing with ghostly hauntings, vampire gangs and a web of family secrets. Can she prove herself as an investigator and keep her life-and her heart-intact?