You know how in the Craig house we’re always up to no good.  Someone is always trying to pull the wool over someone’s eyes.  Well, recently my son came home from his girlfriend’s.  In a very convincing voice he says, “Hey, my girlfriend sent you some ice cream treats she found that are low carb.” 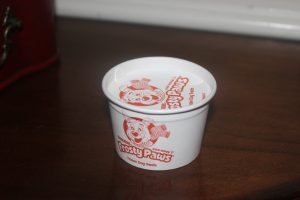 So a while later, I looked in the fridge.  I don’t see a box of ice cream goodies.  Then, I see the cute little cups of ice cream like you used to get in school lunches.  I grabbed one, but hey…  I wasn’t born yesterday, and being a Craig, I’m suspicious, so I started reading it.

Doggy treats!  I marched my butt into the living room and gave my son the evil eye.     “Dog treats?”

“Darn.”  He laughed. “Why do you have to read everything?”

Duh, it’s because I live with other Craigs who think it would be funny if I ate dog food.

Then, my son got that I’m-a-sneaky-Craig smile.  “Why don’t we turn this trick on its head and play it on someone else.”

Seriously?  I mean, he’d just tried to trick me, and now he wanted me to participate in doing something to another innocent person?

Plan made, I picked up the phone and called his girlfriend.  “Hey,” I said.  “I just wanted to say thanks for the ice cream.  It wasn’t all that sweet, but it was good.”

She almost laughed, and then I said, “Where did you get them? I’ll have to pick up some more.”

“Uhh…” she said.  I hear the terror and indecision in her voice and almost read her thoughts. Should she tell me what I ate before I eat another one, or keep her mouth shut?  How pissed is the mother of her boyfriend going to be at her?  “I don’t remember.”

What can I say? She’s a little bit of a coward.   But don’t worry, the longer she hangs around us, she’ll toughen up.

My son stood in the kitchen listening, laughing silently until I hung up.  Then, he held up his phone and said, “I give her ten seconds.”

It only took five.  His phone rang and he put it on speaker.

“Where are you?” she asked.

“Are you alone?” She asked in a low voice.

“Your mom just called to thank me, ME, for the ice cream.  She ate it.  Even liked it.”

He chuckled. “Really. Wait until I tell her.”

“What?  You’re going to tell her?” she almost screamed.

Girlfriend moaned.  “I’m never going to be able to face her again.  She’s going to hate me.”

“This is not funny!” she snapped.

Okay, just another day at the Craig house.  But I have a feeling I need to be on guard.

5 thoughts on “April Fools in August”