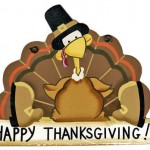 Happy Thanksgiving! Yes, the holidays have arrived–and so has all the stress. So what’s the best way to relax? How about taking a little time for yourself and curling up with a seriously funny book? Divorced, Desperate and Daring is just the book!  In case you haven’t yet snagged your copy, I thought I’d give you one more little excerpt. This time, Sheri and Danny get more than they bargained for.

Danny caught her arm. “Don’t answer it until you know who it is.”

His touch sent currents of emotion right to her chest, bringing with it memories of their night. One night. It shouldn’t have left such an impression on her, but it had. How could something that felt that right have been all wrong? She stared at his hand holding her. He let go.

She went to take another step.

He caught her again but didn’t hold on this time. “From here. Ask who it is, from here.”

She rolled her eyes. “Who is it?” she called out. Taco made snorting noises as he sniffed around the bottom of the door.

Pizza? Her breath got stuck on her tonsils. She looked at Danny. Hadn’t she just seen a Law and Order where the hit man pretended to be . . .

“You didn’t order pizza, did you?” he asked, but she could tell by his expression, and probably due to her own expression, he already knew the answer.

He pulled out his gun.

This had to be a nightmare! She reached down and pinched herself again.

Her heart started thumping.  Her mind commenced to racing, her dog went straight to drooling. Did someone really want her dead?

Danny pulled her back into the kitchen. The doorbell rang again. Taco barked.

“Taco,” she called out, “here!” The dog, drool oozing from his jowls, followed the command and came and bumped up against Danny, leaving a string of slobber dangling from his jeans.

“Do you have a gate that leads to the front?” His low tone sounded like it came from a scary movie.

She nodded and looked at her French doors. Then she realized she’d seen this movie. And it didn’t end well. “Stop,” she said. “He . . . might have a gun.”

“Wait.” This time, she caught his arm. “Can’t we just call the police?”

“Someone besides you!” she bit out.

His blue eyes caught hers with a flash of warmth. His expression told her he knew. Knew she cared. And she did. Not that it meant anything. She was a preacher’s daughter. She cared about a lot of stuff. She cared about most people. She cared about that opossum she’d run over last week.

The doorbell rang again. The dog started back into the living room. “No, Taco!” She released Danny and grabbed the animal by the collar.

“Go to your bedroom!” Looking insulted, Danny took off.

She stood there, her heart fluttering, her pulse trying to catch up. Not breathing. She hadn’t been ordered to her bedroom in . . . Oh, hell!

One step, that’s all she took toward the bedroom. That’s when it hit. The flight-or-fight instinct. She’d been born a natural fighter, but her father had worked hard to get the turn-the-other-cheek adage into her, and in some ways it had worked. But in other ways . . .

If Danny got shot, she’d feel really bad. Even worse than she did about the opossum she’d run over.

She swung around, snatched her purse, pulled out her pepper spray and hauled ass to the front door.

She heard Danny yell out, “Police!”

Banging noises, like a fight, echoed from outside. Envisioning the pizza guy shooting Danny, she stepped to the side and slung open the door. A pizza box flew past her. The pizza guy started forward. She held out her canister and pressed the nozzle, but before the spray left the canister, the pizza delivery guy fell forward.

And then everything went crazy. Or crazier.

She got hit by the pizza guy. Danny got hit with the pepper spray. The pizza guy’s crotch got hit by her knee. Taco didn’t get hit by anything, but he did get the pizza. And considering he was lactose intolerant, that was not a good thing. 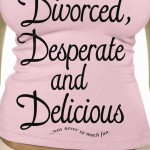 And for a limited time, you can download Divorced, Desperate and Delicious, the first book in my series, for FREE. Don’t miss this opportunity!  Download your copy at Amazon, Barnes & Noble, iBooks and Kobo.

Wishing you and your family a very Happy Thanksgiving!