WINNER!  The winner from last week’s flying pig blog is . . . Julie S.!  Please email me at: christie (at) christie-craig (dot) com and let me know which of my books you’d like, along with your mailing address.  Congratulations! 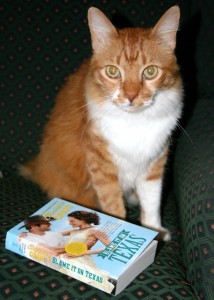 Mystery Solved:  Hubby Does it Again

Most of you have read my blogs concerning my hubby.  He’s just so dang good at giving me blog material. From plumbing disasters to setting the lawnmower on fire, he’s always up to something.  But this time, his predicament wasn’t just blogable, it was a mystery.  One that had us all scratching our heads and laughing our butts off.  But, as of a few minutes ago, the mystery is solved.  But I’m still laughing.

Okay, let me give you the background info first.  We have cats.  Too many cats.  Four to be exact.  They are all indoor kitties, but we have a dog run with a kid’s fort/playhouse in it in our backyard, and sometimes we let the cats go outside and play in the dog run.  If they really wanted to, they could climb out, but they’re not young kittens, and they pretty much just enjoy their little play area.  And sometimes we’ll let the two who really love the outdoors sleep in the garage at night.

Well, the other night it was around eleven o’clock and it was raining, and hubby remembered that Mama Socks, our black and white kitty, was still in the dog run outside.  So he put on his shoes and trudged out into the dark and the rain to bring her in.

He comes in a good four minutes later shaking his head, but without the cat.  “What happened?” I asked. 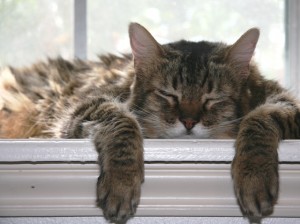 “Hell if I know.  She was hiding and staying dry in the covered portion of the fort, I reached in and picked her up, and she went psycho.  I swear she was trying to bite me.  I barely managed to hold on to her.  She fought me like a devil so I just put her in the garage with Bob.  Why the hell she’d want to stay out when it’s raining is beyond me.”

Now, let me stop right here and ask if any of you have seen that commercial about needing glasses where the woman is walking back in the house and saying, “Good kitty,” and a raccoon is following her inside?  You know where I’m going now, don’t you?  And yes, hubby has really bad eyes.  But in his defense, it is really dark back there.

Anyway, the next morning I went to let the dog out.  It was still raining and I heard this very insistent meowing coming from the dog run.  I looked out and Mama Socks was standing in the rain, wet, and looking very upset that we’d let her spend the night outside in such dire weather conditions.

So I go grabbed her and brought her in.  Hubby sees me and says, “So you got her out of the garage?”

That’s when I remembered his story about the cat last night.  “No,” I said, “She was in the dog run.”

I started laughing.  “I don’t know what you put in the garage, but she was in the dog run.”

He stood there looking at me as if I was making the whole thing up.   “This ain’t funny.”

Oh, but it was.  I got this image of him picking up a possum or a raccoon and tossing it in the garage.  I went to the garage to see what was in there.  Bob, our other cat, who was already in the garage before the whole Mama Socks incident, wouldn’t even come out.  I was worried that the pissed off raccoon he threw in the garage could have injured Bob.

But, finally, Bob showed up, looking as if he had a rough night, too.  Hubby swears he could not have mistaken a raccoon or a possum for a cat.  “It would have bit me,” he insisted.

I reminded him that he said it almost did, and then I started to laugh.

Now I wasn’t so sure it wasn’t a raccoon or possum until three days later.  You see, I was writing and looked up and saw a black kitty, same size and eye color as Mama Socks, staring at me from my French doors.   Our neighbors had gotten a new black cat.  Poor Fluffy will probably stay out of our backyard from now on.

You know, I think hubby is gonna be a tad more careful what he picks up in the dark from now on.