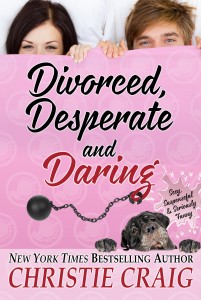 Sheri Thompson knew better.  She could spot a horn dog from a mile away, especially when she’d been warned about him countless times by her best friend.  Still, when Danny started smooth talking Sheri at that same friend’s wedding, she couldn’t resist.  It was the best one-night stand of her life.  Heck, the best night of her life.   And then she woke up alone.

Divorced and determined to stay that way . . .

Detective Danny Henderson didn’t like fear, but he’d felt a lot of it that morning he’d woken up feeling all warm and cozy next to the one woman that might just make an honest man of him.  Six months later, fear has punched him in the gut again, but worse this time.  He’s investigating a murder plot…a planned hit.  The target: Sheri Thompson.  This time his fear won’t get the best of him.   He’ll kick ass to keep her safe and make sure he gets a second chance at countless more nights with the woman of his dreams.

Don’t miss out on Danny and Sheri’s bumpy romance and Della Tsang’s chance to clear her father’s name –and find the one guy who can win her heart.

1 thought on “Books Up For Pre-Order!”