It’s June, the kids are out of school (or will be soon), and you’re looking for something to read. Did you know you can read several of my books for free on Wattpad? That’s right. For FREE. Not only can you read my Christie Craig books, but you can also read some of my CC Hunter novellas and parts of my books. It’s a great way to introduce yourself to my YA Shadow Falls series. All you need to do is click on the title to follow the link. 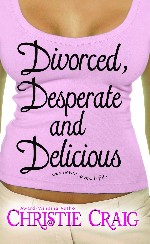 Ever since photographer Lacy Maguire caught her ex playing Pin the Secretary to the Elevator Wall, she’s been content with her dog Fabio, her three cats, and a vow of chastity. But all of that changes when the reindeer-antlered Fabio drags in a very desperate, on-the-run detective who decides to take refuge in her house—a house filled with twinkling lights and a decorated tree. (Okay, so it’s February, but she has a broken heart to mend, a Christmas-card shoot to do, and a six-times divorced, match-making mother to appease.) For the first time in a looooong while, Lacy reconsiders her vow. Because sexy Chase Kelly, wounded soul that he may be, would be an oh-so-delicious way of breaking her fast. Now, if she can just keep them both alive and him out of jail . . .

You can also download it for free from Amazon, Barnes and Noble and Kobo.

You can also read the first three chapters of Gotcha! 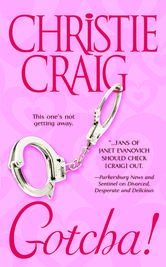 Macy Tucker was 5 years old when her beloved grandfather dropped dead in his spaghetti. At 12, her father left his family in the dust. At 25, her husband gave his secretary a pre-Christmas bonus in bed, and Macy gave him the boot.

That’s why dating’s off the menu. Macy is focused on putting herself through law school—which means being the delivery girl for Papa’s Pizza. But cheesier than her job is her pie-eyed brother, who just recently escaped from prison to protect his new girlfriend. And hotter than Texas toast is the investigating detective. Proud, sexy…inflexible, he’s a man who would kiss her just to shut her up. But Jake Baldwin’s a protector as much as a dish. And when he gets his man—or his woman—Macy knows it’s for life.

And for those of you that read my YA Shadow Falls series or even for those of you interested in giving it a try, you can read the first two chapter of the very first book in my series, Born at Midnight and the first chapter in Della’s first book, Reborn, and the first three chapters in Della’s second book, Eternal.  Haven’t read my CC Hunter novellas? You can read the entire novella Turned at Dark. Find out how Della Tsang was first turned vampire. You can also download Turned at Dark for free from Amazon, Barnes and Noble and Kobo. And then there’s my novella Saved at Sunrise also available for free on Wattpad. Follow Della on her first F.R.U. mission with the sexy shapeshifter, Steve.