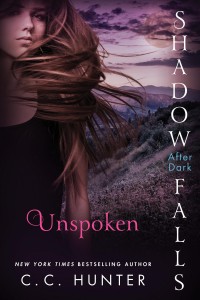 I finally finished writing my YA novel Unspoken and did my happy dance around my house.  Not that I was glad to be done with Della, that’s not it at all. I’ll miss her like crazy.  It’s just that Unspoken was a hard book to write, not only because Della got herself into so much trouble I was nervous she’d never be able to get herself out, but also because I had a lot of distractions while I was writing (like hubby getting a new kidney). But now it’s finished and in the hands of my editor. So, Della’s final book, Unspoken, is scheduled to be released October 28, 2015. You can pre-order it now at Amazon, Barnes & Noble and Kobo.

In the meantime, Spellbinder will be out on June 30, 2015. So, you can look forward to Miranda’s novella.  She has quite an adventure in Paris, where she goes for a huge magic tournament. It seems someone wants to win so badly, they’re killing off the competition. And Miranda’s in the cross hairs! Pre-order it now at Amazon, Barnes & Noble and Kobo.

Me? Well, I’ll be going to conferences and book signings and plotting what’s next. And as soon as know what is coming, I’ll be sure to let you guys know.  Like this Thursday, May 21st, I’ll be at The Storybook Garden in Weslaco, TX, starting at 6:00 PM. I’ll be giving a short talk and signing books. You just never know what might happen! Then, RWA’s Annual Conference will be in New York City in July, and I can’t wait. I love the Big Apple! I’ll be participating in their Literacy Autographing on July 22nd, from 5:30 PM to 7:30 PM. Follow the link to see all of the authors who will be there. Oh and, hopefully, I’ll even find a little time to squeeze in a beach holiday at some point. Happy summer!

P.S.  Thank you to all the fans who showed up at RT. You guys made me feel so special.

3 thoughts on “Unspoken and Other News”