I hope your year is kicking off to a great start.  With Valentine’s Day right around the corner, and because as a romance author, love is the foundation of my career, I wanted to celebrate with a contest.  Three of my lucky fans, will win a $100 Visa card to help treat their ‘somebody special’ to a night out.  That’s right, go out on a date or have dinner delivered in, and it’s on me.

How do you enter?  It’s easy.  Just leave a review at any e-book retailer, for one of my recent releases: Divorced, Desperate & Dangerous or Divorced, Desperate and Dead.  Send a link to the review to christie@Christie-craig.com and you’ll be entered to win.  I will be announcing the winners, February 2nd, on my blog, http://christie-craig.com/blog/.  It doesn’t matter if the review was posted earlier, it still counts.

What’s on my to-be read pile and pre-ordered pile?

Check out these books:

Break On Through by Christie Ridgway 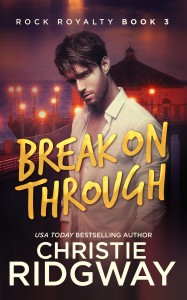 Years ago, Rolling Stone magazine dubbed the nine collective children of the most famous band in the world “Rock Royalty.” Now all grown up, the princes and princesses are coming back to L.A.’s Laurel Canyon to discover if love can be found among the ruins of a childhood steeped in sex, drugs, and rock ‘n’ roll.

Reclusive novelist Reed Hopkins enjoys his solitary existence until single mom Cleo Anderson and her two kids move next door. Suddenly he has neighbors…and the exasperating woman wants to be neighborly. He needs a better security system. A mean dog.

Cleo can’t control her compulsion to make the strong-but-silent man on the other side of the fence smile. Her kids are iron filings to his magnet too and a lonely woman can’t help but begin to dream. Then trouble arrives on her doorstep and Cleo’s concerned that she’s in danger of losing much more than her heart…

The third in the Rock Royalty series, this is romance on the steamy side–just the way we like ’em. 🙂 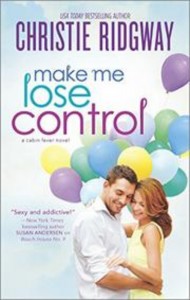 As live-in tutor to a headstrong teen, Shay Walker has her hands full—and the girl’s absentee father doesn’t help matters, either. All Shay wants is to let loose and indulge in a birthday fling with the hottest stranger who’s ever caught her eye. But her one-night stand turns out to be Jace Jennings, her student’s long-distance dad…and now he’s taking up residence—at his lakeside estate and in Shay’s most secret fantasies.

Jace isn’t exactly a family man, but he’s determined to do his best by his daughter—and the first step is forgetting how hot he is for her teacher. But close proximity and their heated connection keeps Shay at the forefront of his mind—even as it’s obvious she holds her heart in check. So does Jace. Until they both realize that losing control just might mean finding forever.

Back in the Game: A Stardust, Texas Novel by Lori Wilde 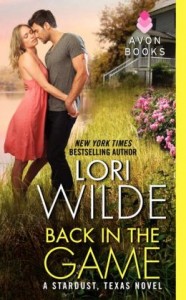 Wanted: ghostwriter. Must be female, a baseball fan, and have a great pair of legs.

Ex-pitcher Rowdy Blanton never saw a woman he couldn’t conquer or a team he couldn’t beat. And now that he’s off the field he’s ready to tell all about when he played the field. So he chooses Breeanne Carlyle to do the job—she’s got the requirements, but more important, there’s something about her that makes him want to be a better man.

Convinced there’s more to Rowdy than a good fastball, a wicked smile, and a tight pair of pants, Breeanne can’t help but be tempted. After all, it’s boring always being the good girl, and Rowdy dares her to be just a little bad. The stakes are high, but win or lose, this time Breeanne’s breaking all the rules playing the game of love.

Fashioned for Power by Kathleen Brooks 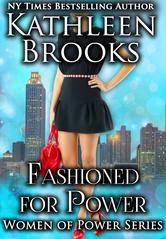 Behind every sexy billionaire is a Man strong enough to love her.

Allegra Simpson is the Vice President of Simpson Fashion and she’s always handled life like her mother taught her — with manners and a smile.  But Allegra learns being nice can get you in trouble as someone haunts her from the shadows and turns her life to one of secrets.  She fears she’ll never be able to have a relationship with Finn, because it would put everyone she loves in danger.

Finn Williams had a promising professional baseball career until an injury disrupted everything.  But Finn wouldn’t let that stop him.  He went to law school and started his own sports agency with the support of the Simpson family.  The only thing missing was Allegra’s love.  The chemistry between the two had been undeniable. But Finn knew there was something that Allegra is holding back from him. He just has to get her to trust him enough to tell him.

Now go leave a review and enter to win a night out on the town for you and somebody you love.

Where will I be?

I’ve got a few upcoming appearances and book signings. So, if you’re in any of these areas, please come on by and say hello.

May 12-17, I’ll be kicking up my heels at the RT Booklovers Convention. I’ll be teaching several teen workshops and participating in their Giant Book Fair on May 17th along with 800+ authors. If you live in the Dallas/ Fort Worth area, you can’t miss this one! For more information check out this link: RT Booklovers.

I’ll be updating my calendar as I schedule more appearances, so keep checking back. I hope to meet you at one of my events!